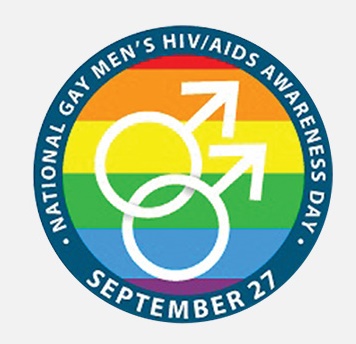 Although gay, bisexual, and other men who have sex with men make up an estimated 2% of the U.S. population, well over half (63%) of all persons living with diagnosed HIV in the U.S. during 2019 were gay or bisexual men. In addition, gay and bisexual men accounted for over two-thirds (69%) of all new HIV diagnoses during 2019.

While new HIV diagnoses among gay and bisexual men decreased 9% overall during the period from 2015 through 2019, diagnosis rates were stable among young men 25 to 34 years old, and increased 5% among men 55 years and older. Trends in HIV diagnoses among gay and bisexual men also varied widely by race/ethnicity during the period, ranging from a decrease of 46% among multiracial men to an increase of 31% among American Indian/Alaska Native men.

This year, National Gay Men’s HIV/AIDS Awareness Day (NGMHAAD) will be observed on Monday, September 27 to draw attention to the disproportional impact of the HIV epidemic on gay and bisexual men, and the steps these men can take to stay healthy. To help you and your patients or clients prepare for and mark the day, we’ve compiled an annotated list of online resources focusing on HIV/AIDS among gay and bisexual men.

You may wish to start with the Gay and Bisexual Men and HIV web page from NEAETC’s Online HIV Resource Library. This page focuses specifically on HIV and its effects on gay, bisexual, and other men who have sex with men in the U.S. The page has a downloadable education packet, as well as curated and annotated resources, including fact sheets, surveillance data, reports, and compiled resources from a variety of sources.

National Gay Men’s HIV/AIDS Awareness Day (CDC) – This web page for NGMHAAD has links to a variety of resources focusing on gay and bisexual men from CDC’s Let’s Stop HIV Together campaign. These include sample social media resources and images for Facebook, Instagram, and Twitter about NGMHAAD, self-testing for HIV, and HIV stigma and discrimination.

HIV and Hispanic/Latino Gay and Bisexual Men (CDC) – This fact sheet focuses specifically on the impact of the HIV epidemic on Hispanic/Latino gay and bisexual men – a group with high HIV diagnosis rates in recent years, particularly among young men 25 to 34 years old. Also available in Spanish.

Infographics on Gay and Bisexual Men and HIV

Diagnoses of HIV Infection in the United States and Dependent Areas, 2019 (CDC) – This surveillance report includes detailed information about new HIV diagnoses, prevalence, and deaths among gay, bisexual, and other men who have sex with men (MSM) and persons in other transmission categories. The report includes a Special Focus Profile that provides an overview of HIV among MSM. In addition, Tables 5a and 5b focus specifically on HIV diagnoses attributed completely or in part to male-to-male sexual contact, and many other tables include data breakdowns by transmission category.

HIV Surveillance in Urban and Nonurban Areas 2018 (Preliminary) (CDC) – This slide set presents data on regional variations in diagnoses of HIV and AIDS among adults and adolescents in the U.S. A few slides in this set focus on HIV diagnoses in different HIV transmission categories – including male-to-male sexual contact – in large metropolitan areas, smaller metropolitan areas, and nonmetropolitan areas.

AIDSVu – AIDSVu is an interactive online mapping tool that visualizes the impact of the HIV epidemic on communities across the U.S.  State-by-state data and limited county data for each New England state are available at the following links: Connecticut, Maine, Massachusetts, New Hampshire, Rhode Island, and Vermont. The state data include information on new HIV diagnoses and HIV prevalence with breakdowns by transmission category, including male-to-male sexual contact alone or combined with injection drug use.